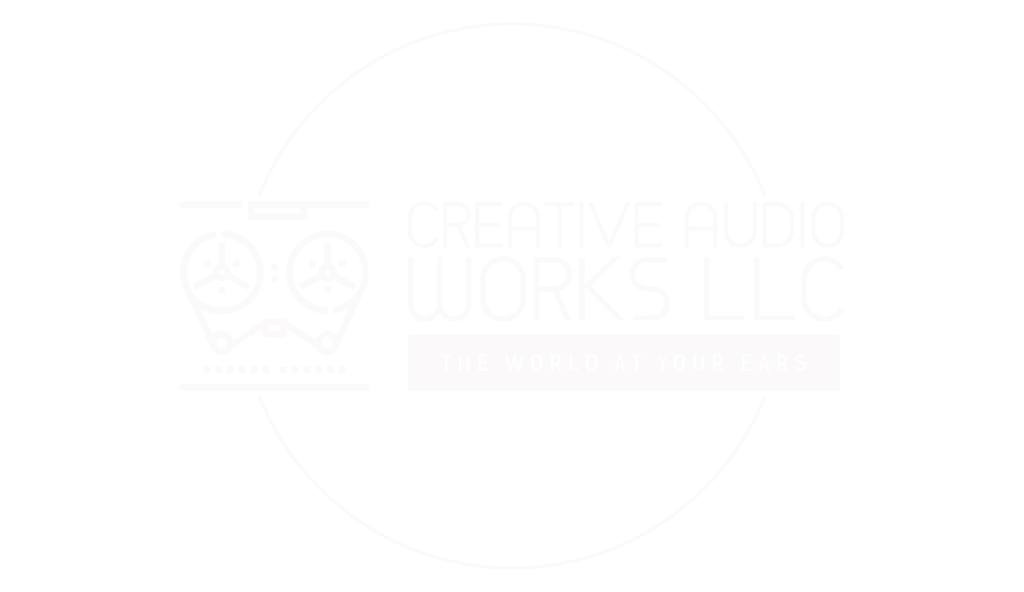 Stewart and CAW were personal, responsive, and the turnaround was fantastic. The resulting files were easily transferred to me and payment was quick and easy. Couldn't recommend CAW more - and that's great to be able to support our Massachusetts businesses. Mike Ladd

Our state-of-the-art audio archiving and restoration equipment has the ability to revive your audio files to exceptional condition. Whether you have family recordings to preserve or need to archive audio media for a research project, we’re here to assist you.

From 16 rpm to 78-rpm records, Gray Audiograph discs, SoundScriber discs, and many other disc formats from the past, our audio disc transfer services use industry-leading technology and expertise to preserve the life of your cherished audio media.

If you are not sure what type of audio media you have or its condition, you can visit our contact page and upload a photo or photos for us to better understand what you have.

At Creative Audio Works, we provide quality transfers of vinyl, laquer, shellac, and aluminum discs. We convert all types of discs from voice letters to transcription discs, 7” to 18″ diameter, 33 rpm to 90 rpm speeds.

As standard procedure, all records are cleaned before transfer. Once cleaned, we transfer each disc onto a modern turntable using a moving coil cartridge with a custom stylus and a state-of-art phono preamp. Additional noise and distortion removal services are available to remove or reduce background noise that may distract the listener. Your original record or disc, Audograph disc, or Voice letter recordings will be returned to you as digital files, CDs, or on a hard drive/thumb drive. 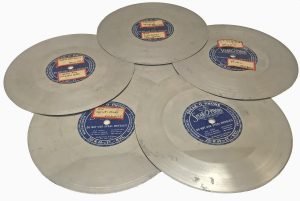 The aluminum disc recording is an obscure phonograph format disc used for one-off recordings from the late 1920s through the early 1940s when aluminum was needed for the war effort. They were used as transcription discs used for capturing events and in coin-operated “record-your-voice” booths, and home recording devices.

The aluminum transcription disc is clearly identifiable as uncoated, bare aluminum. These records have a limited dynamic range and inferior sound quality. Therefore, the recording should be assumed to be unique and will require a proper stylus for playback. These discs came in 5”, 6”, 7” and 10” diameters.

Prior to the transfer, the discs are cleaned in our ultra-sonic cleaner to remove any dirt lodged on the disc or between the grooves. Then it is transferred on our Esoteric Rek-O-Kut Troubadour Turntable, using a VAD LYD MD12 MK4 preamp. We have an assortment of Ortophon cartridges with various stylus sizes to best suit the discs.

Audograph discs are a unique and challenging “dead” media to work with. Introduced in the mid-1940s, the Audograph was designed as a portable dictation system using thin plastic recording discs. These discs were very flexible and prone to damage. The spiral groove is also very shallow, making it hard for the needle to track playback correctly. Also, on playback using modern technology, the sound increases dramatically in speed as the disc is played. Because of this, finding the exact pitch and rendering an accurate restoration becomes a challenge.

Exactly how fast the playback should be at any given point in the recording is always questionable. In the past, there has been no benchmark. With modern technology, we can look at frequencies in the recorded audio that are constant and use them as a benchmark for speed control.

The Audograph is a Constant Linear Velocity (CLV) disc. To put it simply, 1 second of audio will take up X amount of groove travel distance at the beginning of the recording and the same X amount of travel at the end of the recording. This was done to squeeze more information onto a small disc.

Rather than a constant-speed spindle drive as in a conventional turntable, mechanical rollers mounted close to the cutting head drive the disc’s surface directly as the cutting head travels across the disc. A traditional turntable would record X amount of groove travel distance at the beginning, and maybe ½ that amount at the end of the recording. In the case of the Audograph disc, the turntable platter speed continually changes from the beginning to the end of the recording as the circumference increases. As a result, the groove travel distance per second is constant.

The main problem with transferring different formats of that era is that the technology is 70+ years old. Mechanical recording devices of that era have many problems built into them that have to be addressed. The unique mechanical aspects of this obscure format add artifacts like wow and flutter. Inferior cutting head design and inadequate speed control add to the issues and challenges in accurately restoring an Audograph recording.

Since there seem to be no documented/published specifications regarding the Gray Audograph recorder, we have to make decisions based on the transferred files themselves. One problem is determining the pitch of an individual’s voice. We could playback a disc on an Audograph player, but we would not necessarily get an accurate representation of the recorded voice because the player’s electronics are not capable of reproducing full-spectrum audio.

Prior to the transfer, the discs are cleaned in our ultra-sonic cleaner to remove any dirt lodged on the disc or between the grooves. Then it is transferred on our Esoteric Rek-O-Kut Troubadour Turntable, using a VAD LYD MD12 MK4 preamp. We have an assortment of Ortophon cartridges with various stylus sizes to best suit the discs.

When working with old media, it is often required to change the pitch of the audio to sound correct. This Pitch Shift Calculator converts speed and tone changes (revolutions per minute- RPM, inches per-second IPS, hertz-Hz) to semitones and cents in order to perform accurate pitch correction.

I would highly recommend Creative Audio Works to preserve your old disc recordings.  From shipping to communication to the flawless finished product, they were a pleasure to deal with.  Good price. Fast turnaround too!  I just got back a little of my youth.  Thank you!