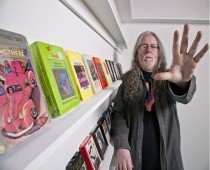 With compact discs going the way of cassettes, it’s unlikely that anyone under the age of, say, 40 even knows what an eight-track tape is. But those who remember–or are just plain curious–will have a place to gather on Valentine’s Day when the?Eight Track Museum?opens in Dallas’s Deep Ellum arts district.

On display in the museum’s inaugural?Conceived In Cars/Birth Of The Eight Track 1965?exhibition will be hundreds of eight-track cartridges, including all Beatles albums released in the format. Also featured is the extremely rare folding eight-track–a variation introduced in response to the audiocassette and marketed for only a few months in 1970.

Cloud 8 is the name of colorful museum founder Bucks Burnett’s “dead format” eight-track only label. He has now renamed his three-year-old Earotica Music retail store, located in the Dolly Python complex on Haskell Avenue, Cloud 8–“in solidarity” with the museum’s retail division.

Burnett came up with the idea for the museum 20 years ago.

“I had a used record store called 14 Records and sold eight-tracks initially as a novelty,” recalls Burnett, whose other timeless endeavors include the launch of the?Mister Ed?Fan Club in 1975 (the members of Monty Python were its first members, with Andy Warhol and Alice Cooper joining later) and organizing the Edstock Festival in 1984 (Alan Young, who played Wilbur, was there, and Joe Ely, T Bone Burnett [no relation] and?Tiny Tim–whom Bucks produced and managed–performed).

“But they started selling–and actually quite well,” he continues. “I set up a whole eight-track display area because I was the only game in town. This was pre-eBay–the early ’90s–and when I closed the store in ’95, I jokingly said I’d start an eight-track museum.”

By then, of course, the eight-track audiotape configuration was long extinct. The approximately 5 1/4 x 4 x 4/5-in. format became wildly popular in cars after their 1965 debut, but had long since fallen out of favor by its demise in 1989–thanks to the audiocassette tape’s smaller size and easier portability.

“It was sort of a joke, but I kind of meant it when I said it–and 20 years later I’m finally doing it!” Burnett says of his museum concept. “When I first bought the eight-track Beatles?White Album?in 1988 at a garage sale, I fell in love with it as an outdated but cool relic–and an official Beatles product even if it was an eight-track. Five years later I had a complete Beatles eight-track collection! I had to actually go painstakingly to thrift stores and flea markets back then to be an eight-track collector, whereas now it’s a few clicks on eBay–though even on eBay some stuff doesn’t turn up, or it’s very expensive because eight-tracks have risen in value over the past 15 years.”

Burnett partly blames himself for the increase in respect and corresponding price of eight-track tapes as collectible artifacts–some selling for $100 and up at auction.

“I got a lot of publicity 20 years ago just for selling them as collectibles, and raised prices on classic Led Zeppelin or Pink Floyd eight-tracks from $5 to $20,” he acknowledges. “Pink Floyd’s?The Wall?CD is $20, but the eight-track should be $25. I sold a Sex Pistols eight-track in ’92 for $100 and it went out as a wire story and got picked up nationally and in?Goldmine Magazine, and I actually got hate mail from eight-track collectors saying, ‘Thanks! My eight-track days are over.’ But I figure it was good for the Sex Pistols’ career.”

Burnett eventually got an astonished Johnny Rotten to autograph a Sex Pistols eight-track. After closing 14 Records (named, he says, because the number 14 “sounded like a lot of records–more than you can count on two hands”), he found he missed being “an important member of the eight-track community.”

He staged a first exhibit of eight-tracks from his private collection in October, 2009, at the prestigious Barry Whistler Gallery, and drew 300 people opening night–with another 50 to 100 showing up for each of the event’s following three days. A second exhibit was held last March near the town square in Denton, Texas, and featured a special celebration of the 35th anniversary of Lou Reed’s?Metal Machine Music.

“Eight-tracks are still considered a joke–and I’m having a good laugh myself–but at the same time, with the success of the art gallery exhibit I knew I’d get phone calls,” he tells a reporter. “You’re one of them!”

Burnett held a one-day “soft” opening for the museum on Christmas as a test, and says that 150 people showed in six hours.

“We sold a ton of t-shirts,” he says, noting that the Cloud 8 Gift Shop also sells all formats of music, books and “rock junk of any kind.” The museum itself displays all audio formats from wax cylinders to iPods, in addition to over 2,000 eight-tracks.

The Valentine’s Day grand opening will be highlighted by performances by Dallas band The O’s, whose new album?Between The Two?will be released in a Cloud 8 limited edition eight-track version, and Dallas songwriter Stu Dicious. Tina Weymouth and Chris Frantz, the nucleus of Talking Heads offshoot?Tom Tom Club, will be present to sign Cloud 8’s version of their latest album?Genius Of Live, being released in a special 30-piece eight-track edition in commemoration of the legendary band’s 30th anniversary.

“We feel inspired and astonished that in our thirtieth year,?Genius of Live?will be available through a technology platform that is clearly on the rebound from obscurity to its rightful place as the transcendent format of the 21st century,” states Weymouth and Frantz.

Burnett has made a “video guided tour” of the museum to let people know that the Eight Track Museum is for real, and is wrapping up a documentary about eight-tracks,?Spinal Tape, that he began filming in 1992 and will include commentary from Jimmy Page, Tiny Tim, Talking Heads, the Velvet Underground’s Sterling Morrison and Black Oak Arkansas’ frontman Jim “Dandy” Mangrum. He’s also writing a book about the tape format.

“We want to introduce the concept of the eight-track as a limited-edition collector’s item format with the goal of having release parties for artists, who sign and number them and sell them out literally overnight,” says Burnett. “It creates a buzz for the bands and the museum.”

Although “you can buy really great working players on eBay any day of the week,” Burnett is not starting Cloud 8 for people to?play?eight-tracks so much as collect them.

“I don’t even play eight-tracks,” he says. “I just collect. I think they’re cool artistic relics. Think of how great Led Zeppelin album covers are, and imagine lining up all 10 eight-tracks side-by-side, with all the different-color plastics backing up that great cover art. They look cooler than LPs, and they’re harder to get!”