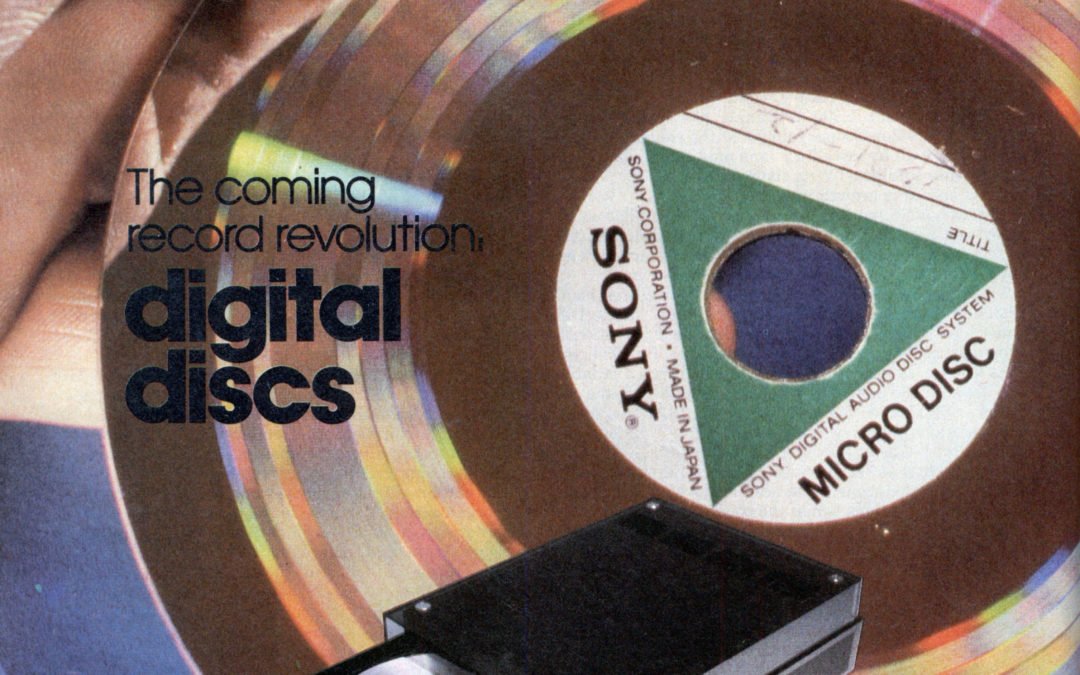 A Sony technician slipped a small disc into the slot of a player no larger than a portable cassette machine. I noticed the record?\’s shiny surface broke the light into rainbow colors. Seconds later I was bathed in rich, wide-ranging stereo music that sounded better than anything I’d ever heard from discs or tapes.

Sony Corporation’s Dr. Toshi Doi, a leading digital-systems designer, explained that this was a true digital record: Information stored as number codes on its surface was being converted into music. Instead of grooves, this disc had an optical track read by a laser beam. I heard absolutely no surface noise or distortion and no pitch fluctuations from the spinning disc. Dynamic range, or the difference between the loudest and softest musical sounds, was awesome.

You can’t buy such a digital audio disc (DAD) now at any price. But players and digital discs will be on the market in 1982-?83?sooner than anticipated. The new DAD technology merges hardware similar to that used for videodiscs IPS, July 1981 with specially developed digital integrated circuits. Disc players, which can be plugged into any conventional hi-fi system, could cost from $500 to $1,000. Discs, initially, will cost about $15. They have unique advantages-detailed shortly compared with conventional LP records.

For more than three years representatives of companies participating in DAD technology have been trying to establish a disc standard. Audio firms want to avoid confusing consumers with incompatible discs and hardware.

But recently a council of 51 companies in the field ended its deliberations without establishing a definite DAD standard. Instead, the council leaned heavily toward the Compact Digital Disc system I had seen in Tokyo. This system was originally developed by Philips of Holland. Since its first showings [PS, Oct. ’79], Sony and Philips have been working together to improve the system and convince others quite successfully that it should become a world standard.

While the Philips-Sony DAD system is based on optical laser technology, Telefunken of West Germany has been demonstrating a different groove-type disc system. A mechanical pickup stylus traces digital information contained in the spiral groove. It now seems unlikely, however, that Telefunken’s system will be accepted as a world standard, or even be offered to the public in the near future.

That leaves one other system, based on a grooveless disc that uses a pickup to sense minute changes in disc capacitance. This DAD was developed by JVC as a companion to its VHD (video high density) disc player for TV, slated for marketing early next year. JVC’s audio-disc system uses the videodisc player with an extra plug-in adapter.

Music reproduction for these DAD’s begins with a master tape using digital encoding (see box). Recording studios have been using this digital technology for several years. (Some conventional LP records are now called digital discs, but these are simply regular records made from digitally recorded master tapes.) Here’s how this digital music information from a master tape is used for the Philips-Sony DAD.

The disc is only 4.75 inches in diameter, but it can store up to one hour of stereo on a single side. Four-channel recordings at reduced playing times are also possible. Digital audio information is stored in the form of microscopic pits in a thin metal layer beneath the clear plastic disc surface. The pits are only about 0.6 microns (millionth of a meter) in width and about 0.2 microns deep.

Digital signals from the master tape turn a laser on and off, creating a continuous spiral pattern of these pits for a master disc, which becomes projections rather than pits on production stamping discs. For an hour-long disc, the track of pits and flat, highly reflective area between them is some 2.5 miles long.

This track is made up of six billion bits, the ones, and zeros of binary language. It is read from the disc by a laser beam focused many times finer than a human hair. The beam is produced by a tiny solid-state laser. Light reflected from the flat areas between the pits is detected by a light-sensitive diode. Other circuits then convert these light flashes into music.

Since there’s no physical contact between the laser beam and the disc surface, no matter how many times you play a disc there’s no record wear. Also, the transparent plastic coating of the disc makes it immune to dust, most smudges, and rough handling. That’s because the laser penetrates minor imperfections on the outer plastic coating.

Actually, each side of a Philips-Sony disc has a storage capacity of over eight billion bits. This is more capacity than 60 minutes of sound requires, so the added digital storage space offers fascinating new possibilities for hi-fi recordings. Some of the extra two-billion-odd bits, for example, can store detailed information about the music tracks, length, sequence, title, or perhaps the text of selections. This added information might be displayed on an alphanumeric display on the player, or other models could put it on a TV monitor

The sonic impact of music from a digital disc player must be heard to be appreciated. But the specifications for the prototype Dr. Doi demonstrated for me at Sony help explain why the sound is so impressive. For one thing, the frequency response is ruler-flat from 20 Hz to 20,000 Hz.

Also, there is no measurable wow or flutter and no audible rumble. The signal-to-noise ratio, dynamic range, and even stereo channel separation are all in excess of 90 dB. By contrast, carefully pressed analog LP records seldom have noise and dynamic-range specifications above 60 dB, and channel separation of 35 dB is available only with superior phono cartridges. Harmonic distortion from the digital discs is less than 0.05 percent, compared with pickup distortion on vinyl LP’s that’s rarely less than one percent.

These remarkable performance figures are obtained with a Sony or Philips player that’s constantly changing the speed at which discs spin. Unlike today’s constant-speed record players, the compact DAD is laser-scanned at 500 rpm near the inner circumference, gradually slowing down to about 200 rpm near the outer disc circumference. This variable rotation rate keeps the linear speed along the digital tracks constant at about 1.2 meters per second.

Last spring, at a joint news conference held in New York, Sony and Philips announced plans for marketing their disc system. Europe and Japan will see the players in late 1982 if plans hold, while the U.S. introduction may be early in 1983. Both giant electronics firms know that disc availability will be critical for the new system to succeed. They’ve made arrangements with the Polygram Group, a major worldwide record company, and CBS/Sony Inc., the largest record firm in Japan, to produce albums in the new compact format.

The second digital audio-disc system we? re likely to see next year is AHD (audio high density), developed by JVC with its videodisc. This format carries audio information as multiple rows of pits arranged in spiral tracks on discs. The disc rotates at a constant 900 rpm. A diamond pickup stylus with a metallic section glides along the surface of the grooveless disc, guided by additional tracking signals located alongside the audio tracks. AHD discs are made with electro-conductive plastic. The stylus reads millions of tiny pits as changes in capacitance. This information is translated into digital signals and then into hi-fi audio signals. Discs are 10.2 inches in diameter and are automatically loaded from a protective case slipped into the player.

JVC says it plans to market its videodisc player, used to play AHD digital discs, at a price that?s competitive with the $500 capacitance-type video machines made by RCA and others. But it has not said how much the addon digital audio processor will cost.

The Japanese company has demonstrated a variety of ways a combined AHD/VHD format could be used. An AHD disc I saw demonstrated at an Audio Engineering Society convention was capable of playing either three-channel stereo music or two-channel stereo with still video pictures changing every few seconds.

While JVC’s system uses a single player for both video and audio discs, the larger disc size, plus the physical contact between pickup stylus and disc surface precludes adopting the format for car stereo. Sony and Philips executives say this will be an important plus for their compact disc.

Which system, JVC’s AHD or the Philips-Sony compact disc, will win? My guess is that JVC’s success will be largely with the videodisc portion of its system and that the no-wear, laser-playback compact disc will become a world standard. But the transition to digital audio will be slow. And compact DAD’s take up so little space you’ll easily find room for your old and new record collections.