There was a time when the only portable music for your car was an AM radio. 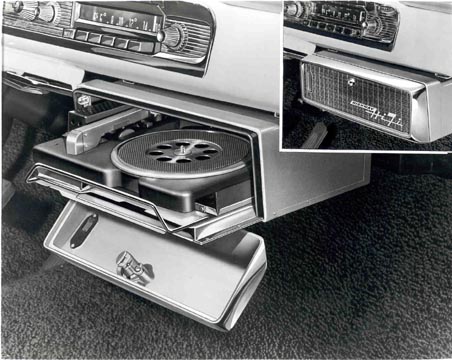 Just because you’re driving in your car, it doesn’t mean that you can’t take your hi-fi music with you. Here’s a Chrysler innovation: a phonograph for your car. In 1956 Chrysler teamed with CBS to create the “Highway Hi-Fi”  an under-dash phonograph that played vinyl records at a super-slow 16-2/3 revolutions per minute. The slow speed allowed a small disc to pack up to an hour of entertainment on each side. Special mechanical engineering reduced the number of times and distance the needle would skip across the disc as the car drove over bumps in the road.

Putting such minor practicalities as potholes, speed humps, going round corners, record storage, changing them whilst on the move, we think the concept of a dashboard-mounted record player seems a sterling idea and one we approve of immensely. Back in the 1950s radio stations were not as plentiful as today. And if you did not like the choices that were within range about your only option was to suffer through what you could find or shut the radio off and listen to the road, engine noise, and the sounds of bugs going splat on the windshields.

Necessity is the mother of invention, well Peter Goldmark of Columbia broadcast system research department came to the rescue in time for the 1956 model release Chrysler Corp. was able to offer new car buyers a choice in their listing pleasure. The players were made to mount on the bottom edge of the dash directly above the transmission hump and plug directly into the car radio (top of the line radio of course). By pressing the button on the front cover of the player the door to the player would be open. The turntable could then be slid out to aid in loading the record. Flip the red switch on the left-hand side of the player and the player is on bypassing the radio tuner.

There were a few problems that needed to be dealt with for the players to work properly in a car environment. Besides the obvious keeping the needle on the record. One of them was safely operating the unit while driving! In order to fit the player had to be small so the 45-rpm record diameter size was ideal. Only one problem you would have to change the record every few minutes, this is not only a chore but also it would be dangerous while going down one of the new superhighways at warp speed. So the new 16 2/3 rpm speed was used (ultra-microgroove) with the 7? format (same as 45s) but this would give extended long play and this also added the benefit that the slower speed was less likely to kick up the needle. And with up to 60 minutes per side of entertainment, you could drive quite a distance. 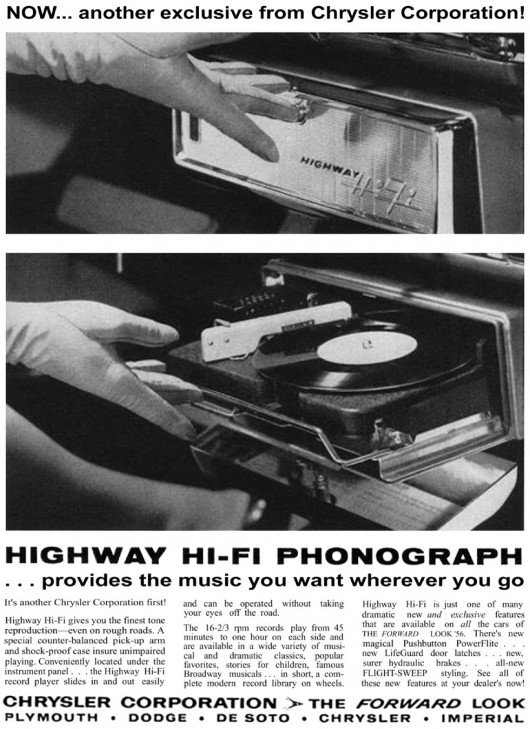 If you were to order one of these on your new Chrysler, Desoto, Dodge, or Plymouth you received with it the first 6 records in the series in a box set, along with a registration card and order form for more records and a carrying case. Only 36 were available when the option first came out with an additional 6 added in early 1956 for a total of 42 available to the general public. The only other records that were made specifically for this player that was not intended for distribution to the general public were dealer demonstration records.

Highway Hi-Fi could only play records that came with the car or ones ordered from Columbia, of which there were 36. You could order “Music From Hollywood” by Percy Faith and His Orchestra, a re-enactment of the Battle of Gettysburg or “Symphonic Serenade” by Morton Gould and the Rochester Pops Orchestra. But could you buy Kay Starr, Perry Como, and Elvis Presley. And Highway Hi-Fi records couldn’t be played on a home hi-fi: the records? special microgrooves were too small for the needles.

By 1957, Highway Hi-Fi had exited to history, to be joined later by eight-track and cassette tapes. Another automobile record player was manufactured by RCA from 1960 to 1961. This later version dropped the “Highway Hi-Fi” label (not being Chrysler-exclusive) and played “standard 45 RPM 7” records. It, too, suffered a short lifespan: the players were even more prone to malfunction than those manufactured by CBS, and standard 7″ records had their grooves worn down rapidly by the high stylus pressure used to prevent skipping.

It seemed like a good idea at the time.

Of course, so did 8 track tapes. Ker-Chunk!?