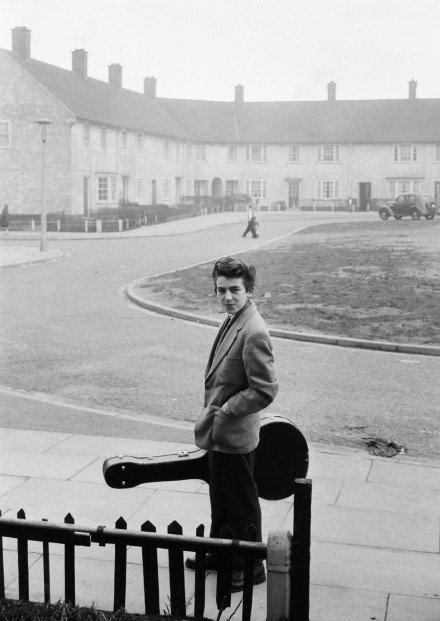 LOS ANGELES (September 8, 2011) ? The GRAMMY Museum, in cooperation with Estate of George Harrison, will debut a major new exhibition,?George Harrison: Living in the Material Worldopening on October 11, 2011. The exhibition will open the week following the broadcast premiere of Martin Scorsese?s documentary of the same name, showing on HBO in two parts on October 5 and 6, and will be the first major museum exhibition to explore the extraordinary life and career of 12-time GRAMMY Award? winner George Harrison.

“I?m honored that Olivia Harrison has chosen to work with us to createGeorge Harrison: Living in the Material World,? said Bob Santelli, Executive Director of The GRAMMY Museum. “We are particularly excited to celebrate Harrison?s extraordinary musical legacy with the legions of fans who admire him, as well as to introduce him to a new generation of music lovers.?

During a career spanning four decades, George Harrison earned a reputation as one of rock?s most talented and innovative musicians and songwriters. As a Beatle, Harrison was responsible for writing some of the group?s most beloved songs, including ?While My Guitar Gently Weeps,? ?Here Comes the Sun,? and ?Something.? In addition, Harrison?s spiritual quest led him to India where he studied the sitar, and began a lifelong friendship with Indian sitar master, Ravi Shankar; their collaborations profoundly influenced the introduction of Indian classical music to the West.

After the dissolution of The Beatles in 1970, Harrison embarked on a highly successful solo career, resulting in several critically acclaimed albums, including his ground-breaking debut triple-album,?All Things Must Pass. In 1971 Harrison staged the now legendary Concert for Bangladesh, raising both money and awareness for the country and ushering in an era of other important benefit rock concerts. Harrison was also a member of the supergroup, the Traveling Wilburys, which had its share of successful recordings as well. George Harrison passed away at age 58 in 2001.

?As a Beatles fan, working on this exhibit has been a fascinating journey for me personally,? said Santelli, who assumed the role of co-curator with GRAMMY Museum curator Tory Millimaki and GRAMMY-Award winning designer Masaki Koike. ?I came to realize George Harrison was a more deeply complex musician than I previously knew, and a beautifully spiritual man whose interests touched not only songwriting and music, but also included photography, filmmaking and book publishing. Hopefully, the exhibit will bear this out, enabling other fans of George Harrison to see him and hear his music in a brand new light.?

Living in the Material World?will provide an in-depth look at all aspects of Harrison?s creative life. Bringing together a collection of diverse artifacts, rare photographs and footage, the exhibit features dozens of items from the private collection of the Harrison Estate, including:

? Several guitars used by George Harrison during his years with The Beatles and in his solo career;
? Handwritten lyrics;
? Personal journals and sketches;
? Stage outfits; and
? Personal photographs shot by Harrison.

?We are very pleased with the results of our collaboration with The Grammy Museum, said Olivia Harrison, George?s widow. ?Bob and his team have brought a great deal of passion and commitment to the project; their collective efforts have resulted in a wonderful exhibit. We look forward to sharing our memories of George with his fans through this first major exhibition about his life.?

George Harrison: Living in the Material World?will be on display in The GRAMMY Museum?s Special Exhibits Gallery through February 12, 2012.

Museum admission is $12.95 for adults; $11.95 for senior citizens (65+); and $10.95 for students with I.D. (ages 6 ? 22) and members of the military. GRAMMY Museum members and children 5 and under are admitted free. Located at 800 West Olympic Boulevard, Suite A245, Los Angeles, CA 90015, with an entrance off of Figueroa Street, the Museum resides within the L.A. LIVE campus, at the intersection of Olympic Boulevard and Figueroa Street in downtown Los Angeles. For more information, please call 213.765.6800 or visit?www.grammymuseum.org. For exclusive content, join the organization’s social networks as a Twitter follower at?www.twitter.com/thegrammymuseum, and on Facebook atwww.facebook.com/thegrammymuseum.

About The GRAMMY Museum
Paying tribute to music’s rich cultural history, this one-of-a-kind, 21st-century Museum explores and celebrates the enduring legacies of all forms of music, the creative process, the art and technology of the recording process, and the history of the premier recognition of excellence in recorded music ? the GRAMMY Award. The GRAMMY Museum features 30,000 square feet of interactive and multimedia exhibits located within L.A. LIVE, the downtown Los Angeles sports, entertainment and residential district. Through thought-provoking and dynamic public and educational programs and exhibits, guests can experience music from a never-before-seen insider perspective that only The GRAMMY Museum can deliver.