From the Collections, Sound Recordings Heard for the First Time 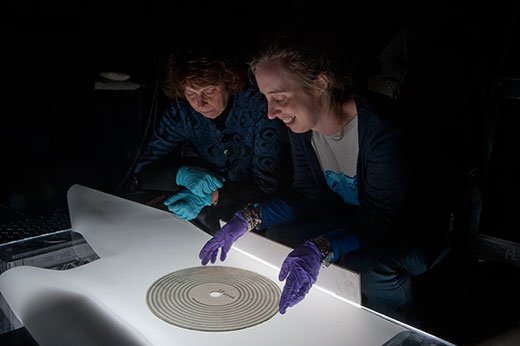 With help from scientists and preservation specialists, the National Museum of American History recovers sound from recordings that have been silenced for over a century

One March morning in 2008, Carlene Stephens, curator of the National Museum of American History’s division of work and industry, was reading the New York Times when a drawing caught her eye. She recognized it as a phonautograph, a device held in the museum’s collections. Credited to a Frenchman named Douard-Lon Scott de Martinville in 1857, the phonautograph recorded sound waves as squiggles on soot-covered paper, but could not play those sounds back.

The?article?reported that scientists at the Lawrence Berkeley National Laboratory in Berkeley, California, had managed the seemingly impossible. They played back the sounds. Using equipment housed at the Library of Congress, Carl Haber, a senior scientist in the lab’s physics division, took high-resolution digital images of a phonautogram found in a Paris archive. Using computer software, Haber analyzed the images and extracted from the recording a 10-second clip of the French folk song?Au Clair de la Lune.? Made on April 9, 1860, the sound snippet predates the oldest known playable sound recording? Handel’s oratorio, made by Thomas Edison and his associates in 1888.

?When I read the article, I thought, oh my gosh,? says Stephens. The American History Museum has about 400 of the earliest audio recordings ever made. Pioneers (and competitors) Thomas Edison, Alexander Graham Bell and Emile Berliner donated the recordings and other documentation to the Smithsonian in the late 19th century. The inventors conducted experiments from 1878 to 1898, and stashed their research notes and materials at the Smithsonian, in part to establish a body of evidence should their patents ever be disputed.

There are a few cryptic inscriptions on the wax discs and cylinders and some notes from past curators. But historians did not have the means to play them. Stephens realized that a breakthrough was at hand.

?I have been taking care of these silent recordings for decades. Maybe finally we could get some sound out,? says Stephens.

So she contacted Haber and Peter Alyea, a digital conversion specialist at the Library of Congress. Stephens called their attention to a group of recordings made in the 1880s by Alexander Graham Bell, his cousin Chichester Bell and another associate Charles Sumner Tainter. The team had created an early R&D facility at Washington, D.C.’s Dupont Circle, called Volta Laboratory. (Today, the site is home to Julia’s Empanadas at 1221 Connecticut Avenue.)

?From 1881 to 1885, they were recording sound mechanically. They recorded sound magnetically. They recorded sound optically, with light. They tried to reproduce sound with mechanical tools, also with jets of air and liquid. It was an explosion of ideas that they tried,? says Haber. ?There are periods of time when a certain group of people end up in a certain place and a lot of music gets created or art Paris in the 1920s and ?30s. There are these magic moments, and I think that historians and scholars of technology and invention are viewing Washington in the 1880s as being one of those moments.?

Eager to hear the content, Haber and Alyea selected six recordings some wax discs with cardboard backing, others wax on metal and glass discs with photographically recorded sound for a pilot project.

?We tried to choose examples that highlighted the diversity of the collection,? says Haber. In the last year, they have put the recordings through their sound recovery process, and on Tuesday, at the Library of Congress, the pair shared a first listen with a small audience of researchers and journalists.

The snippets are crude and somewhat garbled, but with a little help from Haber, who has spent hours and hours studying them, those of us in the room could make out what was being said. ?To be or not to be, that is the question,? declared a speaker, who proceeded to deliver a portion of Hamlet’s famous soliloquy on one disc. A male voice repeated a trill sound as a sound check of sorts and counted to six on another. From one recorded in 1884, a man enunciated the word barometer five times. And on yet another, a voice states the date It’s the 11th day of March 1885 and repeats some verses of Mary had a little lamb.

In fact, during one recitation of the nursery rhyme, the recorders experience some sort of technical difficulty, made obvious by a somewhat indiscernible exclamation of frustration. ?It is probably the first recorded example of someone being disappointed,? jokes Haber.

The National Museum of American History hopes to continue this partnership with Lawrence Berkeley and the Library of Congress so that more of the sound experiments captured on early recordings can be made audible. At this point, the voices on the newly revealed recordings are unknown. But Stephens thinks that as researchers listen to more, they may be able to identify the speakers. In its collection, the museum has a transcript of a recording made by Alexander Graham Bell himself. Could the inventor’s voice be on one of the 200 Volta recordings?

?It is possible,? says Stephens.

via From the Collections, Sound Recordings Heard for the First Time.