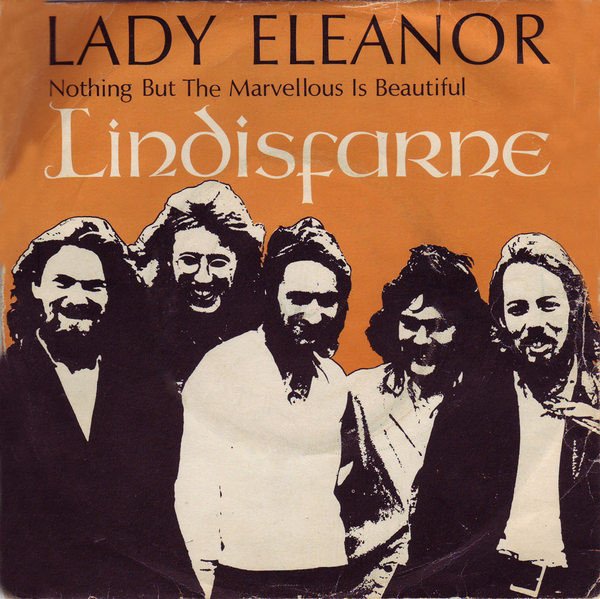 They are best known for the albums Nicely Out of Tune (1970), Fog on the Tyne (1971) and Back and Fourth (1978), also for the success of songs such as Meet Me On The Corner, Lady Eleanor, Run For Home and We Can Swing Together.

The group began as The Downtown Faction, led by Rod Clements, but soon changed their name to Brethren. In 1968, they were joined by Alan Hull and became Lindisfarne after the island of that name off the coast of Northumberland. In 1970 Tony Stratton-Smith signed them to Charisma Records and their debut album Nicely Out of Tune was released in 1970. This album defined their mixture of bright harmony and up-tempo folk-rock. Both singles released from the album.Clear White Light? and Lady Eleanor? failed to chart, as did the album itself at first, however the band obtained a strong following from its popular live concerts.

Their second album Fog on the Tyne (1971), produced by Bob Johnston, began their commercial success. This album reached #1 in the UK charts the following year. The single Meet Me on the Corner and a re-release of Lady Eleanor followed in 1972. The album Nicely Out Of Tune belatedly made the UK album chart Top 10 and the band began to attract a huge media following, with some calling Hull the greatest songwriter since Bob Dylan. The band were even referred to as the ?1970s Beatles?.

in 1972 they recorded their third album, Dingly Dell. The band were unhappy with the initial production and remixed it themselves. It was released in September 1972. Though it entered the Top 10 in the first week of release, it received lukewarm reviews. The ecologically themed single All Fall Down was a UK Singles Chart #34 hit but the second single Court in the Act? failed completely.

Internal tensions surfaced during a disappointing tour of Australia in early 1973. Hull initially considered leaving the band but was persuaded to reconsider. It was agreed that he and Jackson would keep the group name while Cowe, Clements and Laidlaw left to form their own outfit Jack The Lad. They were replaced by Tommy Duffy (bass guitar), Kenny Craddock (keyboards), Charlie Harcourt (guitar) and Paul Nicholl (drums). The new line-up lacked the appeal of the original and with Hull also pursuing a solo career, the band’s next two albums Roll On Ruby and Happy Daze and the subsequent singles failed to chart. They disbanded in 1975.

The original band reformed in 1976 to perform a one-off gig in Newcastle City Hall, but the revival ultimately became permanent. They gained a new record deal with Mercury returned to the charts in 1978 with the UK chart top 10 hit Run For Home, an autobiographical song about the rigours of touring and relief at returning home. The song also gave them a US singles chart hit and the album Back and Fourth moved into the UK album chart top 30. Subsequent singles Juke Box Gypsy? and Warm Feeling? failed to sustain their newfound success. The next album The News (1979) failed to impress and the band lost their record deal.

The next decade witnessed various lineup changes and the band continued to release albums. They formed their own company Lindisfarne Musical Productions and recorded singles such as I Must Stop Going To Parties? in the mid-1980s, as well as the album Sleepless Nights. In 1984 they supported Bob Dylan and Santana at St James? Park. Saxophone player and vocalist Marty Craggs joined the group shortly afterwards. Throughout this period they played annual Christmas tours and released Dance Your Life Away(1986) and C’mon Everybody(1987) – the latter made up of covers of old rock?n?roll standards.

Another album, Amigos, was released in 1989. In 1990 Lindisfarne introduced themselves to a younger generation with the duet Fog on the Tyne Revisited? accompanied by footballer Paul Gascoigne, which reached #2 in the UK singles chart. Soon afterwards Jackson left the band. Cowe left in 1993, shortly after the recording of the album Elvis Lives On The Moon. Hull died on 17 November 1995, but the surviving members continued to use the name.

The band continued to play with a fluid line up, releasing two studio albums, Here Comes The Neighbourhood (1997) and Promenade (2002). A number of live albums were also released.

Lindisfarne finally broke up in late 2003, performing a final concert on 1 November 2003 at the Newcastle Opera House. The final line up as a band included Dave Hull-Denholm, Billy Mitchell, Rod Clements, Ian Thomson and Ray Laidlaw. Three members continued to tour under the name Lindisfarne Acoustic until May 2004.