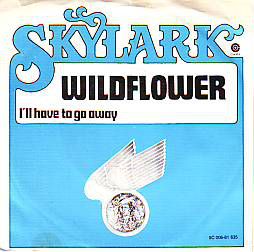 Skylark was a former Canadian pop/rock band active from 1971-1973 and based in the Pacific Northwest. The band formed from one of Ronnie Hawkins’ backup groups and signed with Capitol Records, releasing a self-titled album in 1972 that spawned three singles. The group, whose alumni include renowned composer/arranger David Foster, disbanded after the lukewarm reception of their second album, 2, and its members achieved mixed success in other projects.

Their biggest single, “Wildflower”, was a 1972 number one hit in Canada, then peaking at #9 on Billboard’s Hot 100 chart the following spring, and selling over a million copies] It was written by guitarist Doug Edwards and Dave Richardson, who was a Victoria police officer at the time. “Wildflower” is an early example of the power ballad, featuring a strong, emotional lead vocal, a blend of electric guitar, strings, and harp, distinctive “slow dance” percussion, and almost-gospel background vocals.

“Wildflower” was a song that Edwards composed after reading Richardson’s poem; the song was included on the band’s demo tape. ?Barry De Vorzon, by 1972 an established music business name, heard the demo tape and was convinced that the song would be a big hit. After several studios rejected the demo, an executive at Capitol Records signed the band and the song was included on their eponymous first album. The initial single released from the album was not successful. Rosalie Trombley, a music director at CKLW, a Canadian radio station in Windsor, Ontario, played “Wildflower”, at that time an album cut, repeatedly for three months in an effort to satisfy the Canadian government’s requirements for Canadian content. During that period, it was the only radio station in North America to have the song on its playlist. Capitol decided to release the song in neighboring Detroit as a regional release, where it became a huge soul hit before breaking out nationally and crossing over to the pop charts. Eventually “Wildflower” spent 21 weeks on the Billboard pop charts. The song proved to be extremely popular in Canada as well; it ultimately peaked at number 10 on the RPM Top Singles chart, and number 1 on the Adult Contemporary chart. Total sales of the single exceeded one million copies and were included on their second album as well, at the request of Capitol Records executives who sought to capitalize on the song’s success. Ultimately, the song was their only single to chart in the United States.