The Beatles appeared on the Ed Sullivan Show Feb. 9, 1964 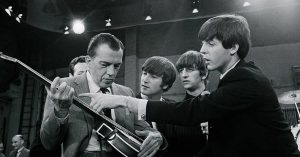 As teenage girls screamed hysterically in the audience and 73 million people watched from home, a record for American television at the time. Their appearance on the show is considered the beginning of the “British Invasion” of music in the United States. The Beatles appeared on the Ed Sullivan Show the following two Sundays in a row, as well. On this first time, they sang “All My Loving,” “Till There Was You,” “She Loves You,” “I Saw Her Standing There,” and finally “I Want to Hold Your Hand” ? which had just hit No. 1 on the charts.