The Thrill is Gone, Goodbye to the dynamic gentlemen of the blues.

In 1979 I was working for Fedco Audio Labs in Providence, RI. Fedco was a 24 track audio remote truck recording live concerts for release on vinyl. The truck had a 22-foot box converted to a control room with 2 MCI 24 track recorders, an API console serial number 007, and JBL 4311 monitors. Fedco’s more famous recordings were Peter Framptons’, Frampton Comes Alive, Mad Dogs, and Englishman- Joe Cocker, Rock Of Ages-The Band, and many more.

In early June, Fedco got a call to record an artist at the University Of Mississippi, “Ole Mis.” Bob Dickson and I set out to drive the truck to the gig. We had a series of minor breakdowns that needed to be fixed along the way. We eventually made it to Tennessee. At about 10 AM, we were driving along Route 40 when steam filled the cab. We could barely see out the window. I don’t remember who was driving, but we managed to pull off the highway and stop. We called for a tow truck and got hauled to a truck stop for repair. It was a rundown shop with two bays and a bunch of old trucks on the property that were in accidents.

It was pretty hot that day – near 90 degrees as I remember. We hung around most of the day trying to figure out what was wrong and how to get the truck to the gig the next day. I remember hearing Poco’s song, In the Heart Of The Night, on the radio 3 or 4 times that afternoon, echoing through the garage.

It was finally determined that the truck would have to be towed the remaining 500 miles. The decision was made to load it onto a lowboy trailer, the kind that is used to haul large construction equipment. While Bob and I were waiting in the office, I noticed an all-in-one stereo system on the floor in the corner, the kind that was a receiver, turntable, and eight-track all in one. I saw a record on the platter, and I looked to see who it was. I saw the title “Guess Who” and at first I thought it was the band  The Guess Who from Canada. After taking a second look, I realized the name of the album was “Guess Who,” and the artist was B. B. King.

The truck was finally loaded onto the lowboy, and we set off for the final 500 miles of the trip. Bob and I stayed in the box of the Fedco truck because there was no room in the cab with the tow driver. We were locked in the back of the truck for about 8 or 9 hours. We wondered all night if the truck mounted on the lowboy was too tall to fit under any of the bridges. We were waiting to see the roof peel off while we were in there. Fortunately, we made it to Oxford, Mississippi, without any accidents.

The next day we set up for the concert, and the headline act came on stage around 8 PM. The album was released about a year later, B.B. King – Now Appearing: Live at Ole Miss.

Goodbye to the dynamic gentlemen of the blues. 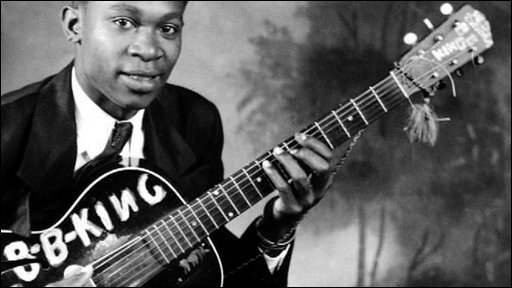