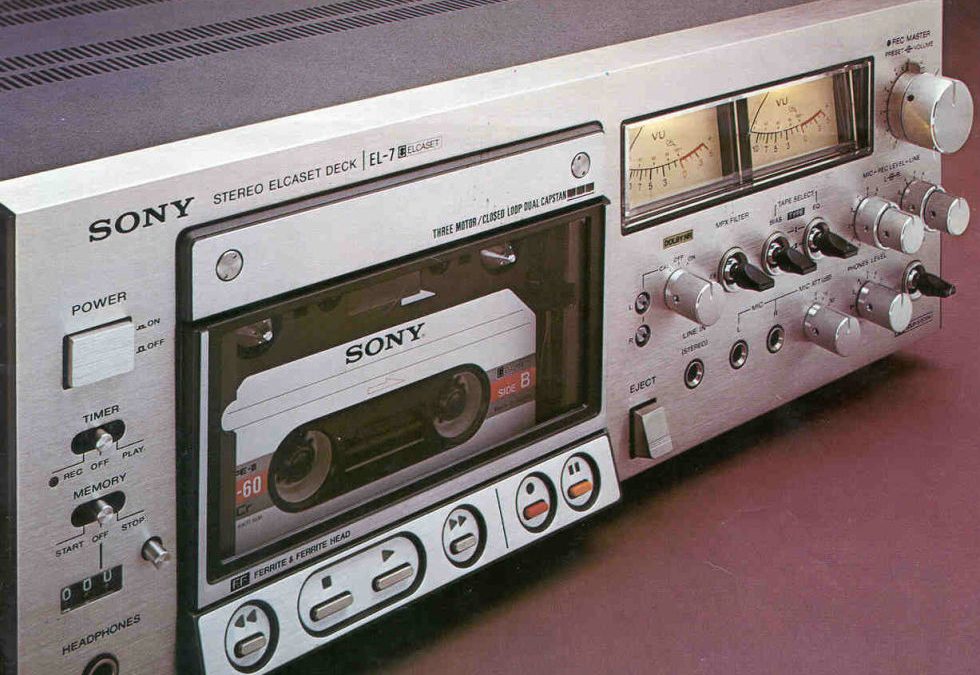 The Elcaset was a short-lived consumer audio format created by Sony, Panasonic, and Teac and debuted in 1976. It was based on the RCA tape cartridge, which had been produced 20 years before. In 1976, it was thought that the compact cassette would never be able to match the performance levels of reel-to-reel recorders. However, there were certain advantages to the cassette in terms of convenience. The Elcaset technology was designed to combine reel-to-reel performance with cassette convenience. Because the 1/4″ tape inside is double the width of compact cassettes, the term “Elcaset” could simply mean “L-cassette” or “big cassette.” The tape was split into four tracks, stereo in both directions, just like a compact cassette. The Elcaset, on the other hand, had two additional tracks running down the center of the tapes that were supposed to be used for a cue track or sync pulse track for AV work but were never used. 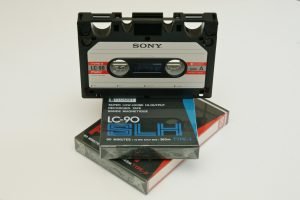 The Elcaset cassette resembles a compact cassette, but it is larger than roughly twice the physical size. It included 1/4 inch (6.4 mm) tape running at 3 3/4 inches per second (9.5 cm/s), twice the width and speed of a compact cassette, enabling higher frequency response and dynamic range with decreased high-frequency noise. When the tape is run through the Elcaset transport mechanism, it is withdrawn from the cassette along the edge of the shell to make contact with the erase, record, and playback heads, which is a significant distinction from compact cassettes. As a result, the cassette shell’s manufacturing tolerances will not affect sound quality. Separate heads for erasing recording, playback, heavy-duty closed-loop twin capstan transport for low wow and flutter, and remote control are all available on the top-of-the-line Elcaset decks. But the Elcaset is more than just a performance machine. The new format outperforms any previous consumer tape system at the time in terms of automation. In addition to the cue-track coding stated previously, the casing (such as that of modern chrome cassettes) can be classified according to the type of tape it contains, allowing for automated bias and equalization. Like the compact cassette, the new system has keyways that can provide erase protection; however, the Elcaset’s keyway is closed by a plastic “gate” that you can adjust as you please, rather than a plug that must be broken loose. 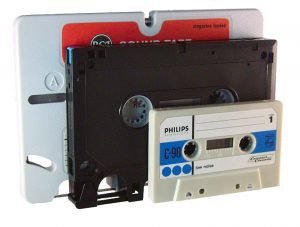 The system was technically excellent, but it was a near-total flop in the marketplace, with only a few audiophiles buying it. Apart from the issue of bulky cassettes, the performance of small cassettes has dramatically increased due to the use of new materials such as chromium dioxide, Dolby B noise reduction, and improved product quality. The quality of compact cassettes, on the other hand, was satisfactory for most individuals, and the benefits of the pricey Elcaset system were limited. As a result, audiophiles abandoned the Elcaset in favor of high-end compact cassette decks from businesses like Nakamichi, who began producing very high-quality tape decks based on the tiny audio cassette in late 1973, three years before the Elcaset was produced. Any compact cassette player could play the cassettes they made. Furthermore, the Elcaset machines were costly.

Overall performance was nearly identical to that of leading mid-range reel-to-reels like the Revox A77. With the cassette already competing against the newer 8-track cartridge, the manufacturers hoped that Elcaset would provide the final blow to the older format, leaving it to fight for market dominance with the 8-track. Unfortunately, Elcaset’s launch in 1976 coincided with the peak of sales for several other inventions. The chromium oxide (CrO2) cassette was one of these. While it didn’t quite match the refinement of the Elcaset, it did significantly improve cassette sound and, more importantly, could be used in any existing cassette player. The CrO2 cassette cost 40% more than a conventional tape, but it provided a premium recording cassette that didn’t require a new deck for the audiophile or the discerning pop fan. After Sony finally released its own chrome tape for the new decks, the primary tape producer, Sansui, began to produce Elcaset tapes. However, it was already too late.

The Elcaset officially died in 1980, with the last few thousand unsold players auctioned off at a fraction of their value to the highest bidder. Unfortunately, however, virtually no serious bids from the United States, Japan, or even Western Europe, with the highest bid coming from a Scandinavian distributor. The Elcaset was a cleverly designed system that offered superior sound quality. Unfortunately, however, the record labels never released prerecorded music on Elcasets. Thus, no one was interested in investing in the equipment or the tapes, save for those audiophiles looking for new audio equipment and recording innovations

At Creative Audio Works, we can take your Elcaset and remove the tape from the shell and transfer the audio on a reel-to-reel recorder, providing a superior transfer to that made by others who use an Elcaset audio deck from the 1970s. After the transfer is complete the audiotape is placed back into the cartridge and returned back to our client.

Contact Creative Audio Works to find out more about Elcaset transfers or other formats that you may have that need transfer.